The Water Win-Win: Food and ecosystems in balance 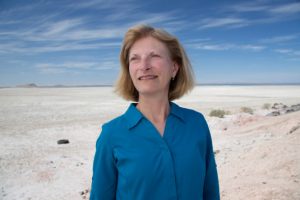 Sandra Postel‘s new book is Replenish: The Virtuous Cycle of Water and Prosperity. It’s about the world water cycle, and about real solutions to the problem of providing water for people and food, and at the same time for nature and wildlife. And it’s also about building coalitions, relationships, and partnerships among many different water users — which, if we’re committed and lucky, just might prevent major water shortages and crises in the not-very-distant future.

Postel is author of several books on water; she’s director of the Global Water Policy Project, and co-founded Change The Course, a national water stewardship project that received the 2017 U.S. Water Prize for restoring water to rivers and wetlands. She’s been a freshwater fellow at National Geographic; she worked with the Worldwatch Institute; she’s was named one of the “Scientific American 50” for her contribution to science; she’s written for many publications like Science and Natural History; and her work formed the basis of a PBS documentary on water.

This program is produced in collaboration with the Quivira Coalition.