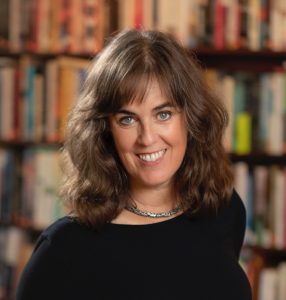 Mary-Charlotte Domandi is a long-time radio and podcast producer. Her public radio program, the Radio Cafe, won numerous awards, including the Santa Fe Mayor’s Award for Excellence in the Arts, the National Federation of Press Women National Communications Contest, the Leaphorn Award at the Tony Hillerman Writers Conference, and awards from New Mexico Book Association — and she was voted “Best Radio Program/Best Radio Personality” six times by the readers of the Santa Fe Reporter. She has produced podcasts for the Santa Fe New Mexican, Arizona State University, and the Quivira Coalition, for whom she produces Down to Earth: The Planet to Plate Podcast, one of the top podcasts in regenerative agriculture. She is a graduate of Yale University and St. John’s College. She is also a Latin music DJ, has studied social and folkloric dance in Cuba, and has interviewed many distinguished Latin musicians.

“As an interviewer Mary-Charlotte is one of the best I’ve encountered — prepared and knowledgeable but also spontaneous and relaxed. Very quickly the mechanics of interviewing fade away and you’re just sitting in a coffee shop chatting with a smart new acquaintance.”
– Charles Frazier National Book Award-winning author of Cold Mountain

“It’s remarkable — when you’re on the Radio Café, or listening to the Radio Café, you’re in the presence of a host who actually listens. And thinks. And has actually done research on you, on your book, on your movie, on your play…. If there were an ideal world, it would be peopled by hosts like Mary-Charlotte who treat their guests as equals, who understand what their point of view may be, whether or not you may agree with that point of view, and actually spend an hour talking about real issues in a substantive way.”
– Kirk Ellis Writer and co-executive producer of the HBO series John Adams

“Mary-Charlotte Domandi is articulate, intelligent, well informed, and genuine. Talking with her, I felt as if I’d made a friend instead of doing an interview.”
– Alan Arkin Actor, Academy Award winner for Little Miss Sunshine

“In my experience, Mary-Charlotte Domandi is one of a handful of interviewers who is able to turn a radio interview into a charged conversation. She makes it so interesting for the interviewee that, before said interviewee realizes it, she’s entirely forgotten that this is an interview and is simply conversing with all her heart and soul. Because Mary-Charlotte is so fully engaged herself, all canned responses are shelved. I suppose this can be a bit dangerous, but it also makes for an unusually alive experience.”
– Rebecca Goldstein MacArthur Fellow, Guggenheim Fellow, novelist, Professor of Philosophy at Yale University, author of The Mind-Body Problem, 36 Arguments for the Existence of God

“Mary-Charlotte provides a tremendous service to the community by doing well-informed, well-organized interviews with scientists. Her preparation is extensive, her questions are insightful, and I hear from both scientists and non-scientists how much they enjoy her programs, even when they are on difficult topics. Science education, particularly in the media, is desperately needed, and for this reason Mary-Charlotte’s highly articulate programs have become all the more valuable.”
– Robert Eisenstein Particle physicist, National Science Foundation (retired), former director of the Santa Fe Institute

“Mary-Charlotte Domandi is one of Santa Fe’s well-kept secrets, and many of us here have long wondered when she would leave us behind for national airwaves. MCD’s interviewing style combines a contagious enthusiasm, a searching mind, and a seeming casualness that disguises the prodigious amounts of preparation she puts into every session. She lets a conversation breathe. In this twittery age when our national dialogue has become coarse, cheap, and abbreviated, Mary-Charlotte offers a civilized alternative, reminding us that the art of talk radio is alive and well.”
– Hampton Sides Author of Hellhound on His Trail: The Stalking of Martin Luther King, Jr. and the International Hunt for His Assassin and Ghost Soldiers: The Epic Account of World War II’s Greatest Rescue Mission