Stepping back from the abyss: James Rebanks’ return from industrial to traditional farming

James Rebanks is the author of the newly-released book Pastoral Song: A Farmer’s Journey, which recently won the 2021 Wainwright prize for UK Nature writing, and best-seller The Shepherd’s Life: Modern Dispatches from an Ancient Landscape.
His books explore the experience of being a farmer from a millennia-old farming tradition that was almost lost to “improvement.” Wonderfully written and highly readable, these accounts of his life in the Lake District of Cumbria, England, give us a lived sense of the promise of industrialism, the genuine short-term gains, and the nuances of what went wrong and why…and the reality that there are no clear heroes and villains, but rather a deeply complex system that has to be managed for land and human health if we want to survive. 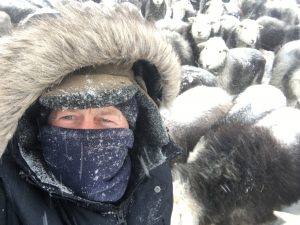 4’06 grandfather went on a campaign to get James excited about farming
5’27 taught to be honorable and values other than profit
7’28 forebears respected wildlife even if they didn’t like environmentalists
8’34 the value of hedgerows
9’05 natural wetlands
9’31 farming “modernization” got rid of hedgerows, native grasses and flowers, draining wetlands, without realizing how much they needed the natural elements
11’00 the story of Henry, a neighbor who never “improved” his farm and had the best soil in the district
12’11 James’ father realized that Henry’s way was right and the “improvements” were the wrong path
13’52 industrial ag has a time lag—you don’t realize right away that it’s harmful
15’07 leaving some grain on the ground helps the birds survive, so optimal efficiency isn’t always a good thing
16’02 analogy to bad diet or smoking
16’50 Rachel Carson wasn’t just about DDT—she was about having the power to change landscapes without not knowing what we’re doing
17’20 risen apes, not fallen angels
18’05 visiting Australia and the US Midwest and seeing the ill-effects of industrial ag
18’49 we’re all made of calories from the Haber-Bosch process
19’23 we thought we’d beaten nature through monocultures and industrialism
20’33 the fallout of all this—we can’t keep winning through more technologies
21’27 industrial ag doesn’t need farmers, and in fact wants to get rid of them
21’51 artificial proteins and all kinds of other gunk
22’08 many farmers trapped in the system
22’58 even industrial agriculture relies on traditional agriculture because it’s so risky to have monocultures
23’52 we need genetic diversity, which is held in smaller, traditional farms
24’34 we don’t know what we’ll need in the future, so it’s very important to maintain biodiversity
25’01 corporations are trying to copyright DNA in the developing world
25’43 death by 1000 paper cuts
26’03 slowly realizing that nobody was understanding industrial ag as it was happening, literally nobody had thought it through
26’45 it all falls apart when you look a it closely
27’39 finding common interests between environmentalism and agriculture
28’21 confluence between self-interest and restoration
29’40 birds came back very quickly…every new habitat they created brought in wildlife very quickly
30’29 “build it and they will come”
31’02 they make more money than when they farmed “conventionally”
31’49 disappearance of farm labor
32’28 US farm workers treated poorly
32’41 regenerative ag has the goal of getting more people back on the land and treating them well
33’04 lots of visitors to James’ farm
34’41 the post-war dream turns out to be wrong in so many ways
35’28 the importance of connecting to food and where it comes from
36’54 farming is rough work
37’18 still, people want to farm
38’09 farming cultivates community
38’32 “we’ve been sold the myth of easy”
39’33 the difficulty of earning a living on the farm
40’10 easier to see a way forward in the UK than in the US, through trade policy
40’50 Norway has protectionist farming policy
41’25 the importance of educating people, and of making better choices and being “troublesome”
42’15 farmers need to stand up as well, say no to traveling salesmen
43’11 showing people who love the region what’s going on at the farm and why they should eat healthy food
43’41 “there’s a rebellion brewing”
44’20 they eat only their own meat now and you feel so much better
44’49 eating processed food makes you feel like rubbish
46’15 his part of England being romanticized by people who are charmed, move there, and then drive up the price of land and try to change the way of life
47’31 he wanted to dislike these people but then started getting to know them and engage them and get them involved in the farm
49’29 separation of men’s and women’s roles
50’01 shepherding often done by women
50’29 it is a man’s story
50’40 his wife will write her story
52’15 the idea of the commons and embracing the word “commoner”
53’08 his people have been there for at least 1000 years
53’56 feeling like the individual in the short term doesn’t matter, going against post-war individualism
55’07 nothing else on earth he wanted to do more than be a farmer