Kiss the Ground: A project born of devotion to the earth 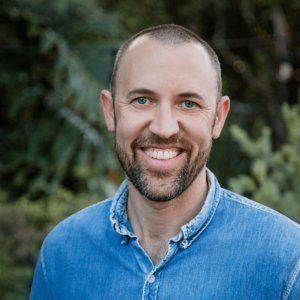 Ryland Engelhart came from a family of vegans and vegetarians and knew early on that he wanted to devote his life to the health of the planet. Once he began to see that there is no food –– no life at all –– without the death of animals, he revised his perspective and at 35 ate his first hamburger. (It went well.) This perspective grew into a deeper understanding of the role of soil as the source of all life, and as the best answer to the question of how to reverse climate change, and he started the non-profit Kiss the Ground and set out to make a film by the same name. Seven years later, the film broke all records for movies about soil; seen by over six million people and translated into 26 languages, it has helped catalyze the regenerative agriculture movement.

TIMELINE
1’51 background in vegetarian family in the restaurant business
5’10 coming to an understanding that crop agriculture wasn’t free from killing
7’14 ate first hamburger at age 35
8’33 previous documentary May I Be Frank
11’30 thinking of people as a positive keystone species rather than destroyers
15’48 having a spiritual experience of connection to the earth as mother, and being asked for devotion to the earth
18’56 seeing soil as the way to devote himself to the earth, being humbled, deciding to make the film Kiss the Ground
24’03 the worldwide impact of the film, the rise of the visibility of regenerative agriculture
27’07 regeneration as a paradigm-shifting concept as agriculture becomes restorative, and the demand of consumers for a better system
31’55 Brown’s groups Understanding Ag and the Soil Health Academy (links) are consulting on over 200 million acres worldwide, and 34 million acres in the US alone
34’03 like shortages and weather disruption can push people in the right direction
35’20 many signs pointing to the need for regenerative ag
35’59 regenerateamerica.com
40’33 re-greening, un-desertifying land––possible and difficult
41’22 agroforestry, silvopasture are exciting opportunities for regeneration of degraded lands, as well as restoring land to prairies and managing grazing animals on them
44’05 young farmers
45’59 regenerative farming and mission-driven businesses are driving young people, along with the sense of service
50’26 new film in the works, a sequel to Kiss the Ground