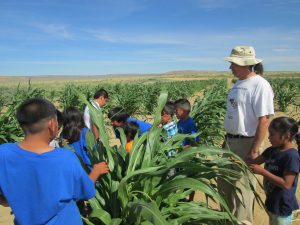 Hopi farmers were practicing regenerative agriculture before it was named. Working with the soil, the weather, the water cycle, seeds, and cultural practices, they fed themselves in the dry land of northern Arizona for millennia. Now the industrial food system has challenged their way of living and farming. We talk to traditional Hopi farmer Dr. Michael Kotutwa Johnson; he’s a research associate with the Native American Agriculture Fund and has a doctorate in natural resources management.

1’41 how Michael learned traditional Hopi farming
2’17 planted a two-acre field with a planting stick followed by a footrace
3’07 regenrative agriculture in the context of Hopi practices
3’27 planting on alluvial flood plains
3’54 planting techniques working with nature and the water cycle
5’14 leaving plants on the ground catches snow
5’44 previous year’s plant matter acts as wind breaks
6’07 “contour farming” is an old Hopi practice
6’43 how Hopi practices were passed down over 2000 years
8’00 Hopi ag not based on economics but culture
8’23 agriculture not “conserving a resource but caring for a relative”
9’35 native understanding of stewardship
11’24 our “panel of experts” are rituals, history, and stories passed down through elders
13’14 the problem of using science-approved practices from other landscapes on Hopi land
15’01 the value of tribes creating their own conservation programs
15’47 cultural identity and getting young people involved in farming
17’17 saving seeds for ceremonies and for food…but sometimes there’s not enough for food
18’29 Hopi people were farmers from the beginning
19’13 Hopi people didn’t notice the great depression because they were growing their own food
20’08 starting a co-op for Hopi farmers
21’05 food self-sufficiency on reservations would lessen dependence on government
21’42 socio-economic problems that cause social and health problems
22’45 uncles are supposed to take the Hopi kids out to farm, but it’s not happening as much as it should
23’03 Headstart kids going to Michael’s field and learning to farm
23’54 taking responsibility for buying into the unhealthy system
25’50 indigenous people “protect 80% of global biodiversity on 25% of the planet’s land, with less than 5% of the world’s population”
26’43 green revolution bad for biodiversity
27’07 green revolution
27’59 native american agriculture fund
30’52 what he’s growing this year on his farm
31’32 seed saving is traditionally women’s work while men do the farming and harvest
32’43 drought tolerant seeds
33’01 predicting droughts
33’58 changing our attitude to farming