The USDA goes after a small sheep farm 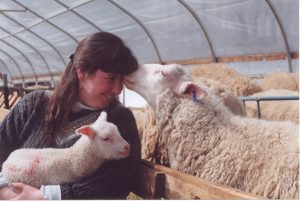 (Linda Faillace; Linda with ewe and lamb; Linda & family as the USDA hauls away their sheep to be killed.)

Linda and Larry Faillace spent years at the University of Nottingham in England, where Linda became an expert in Mad Cow Disease (BSE). Upon return to the U.S., they imported sheep from Europe, with USDA approval, and began a cheese making business in Vermont, with their three children active participants in the enterprise.
But a few years later, the USDA came after them, claiming that their sheep might carry BSE, and told them to surrender their sheep. Because they had science on their side––no sheep had ever had BSE––the Faillaces fought back…with grim and dramatic consequences. Linda’s book, Mad Sheep: The True Story Behind the USDA’s War on a Family Farm , tells the story…well, most of it. The real reason for the USDA’s attack on their farm was revealed a decade later, as she recounts in today’s podcast.
Still, Linda Faillace remains an optimist, and she and her husband have continued to make cheese and teach cheese making and culinary arts. She has a lot to say about the growing power of the ever-growing local food movement.

TIMELINE
4’05 learning about Mad Cow Disease
4’36 starting a family milk sheep farm, doing everything by the book, and being targeted by the USDA
8’27 armed USDA agents took away their sheep and killed them all
9’34 USDA whistleblower came forward a decade later to explain what really happened and why
10’44 sheep were used as a scapegoat to get funding for an expensive laboratory
12’30 the family refused to surrender their animals without testing –– and were punished for it
14’32 USDA put the land under quarantine
16’08 farmers punished for standing up for themselves
17’13 a heartbreak for the children and the family
19’37 robust and supportive community response
21’46 Vermont has many cheesemakers and is supportive of the local food movement
22’50 the healthiest ag practices are most attacked whereas the unhealthiest ones get a pass
24’44 the price of food is artificially low but only for factory food, because here big ag is subsidized; compare to Europe, where small ag is subsidized and good food is cheaper
26’32 inviting USDA inspectors to come to cheese making classes
28’15 cultivating the local food movement
28’57 differences for farmers from one state to the next
30’39 teaching cheesemaking
31’17 still not much sheep cheese making in the US because of the lack of genetics