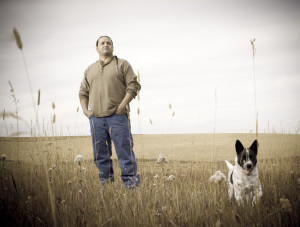 Jason Baldes is Tribal Buffalo Coordinator for the National Wildlife Federation. An Eastern Shoshone native, his people called themselves gweechoon deka, the Buffalo Eaters. But when the buffalo were killed by the US government, their way of life was badly damaged.
Now Baldes is helping to restore buffalo to native lands and public lands as wild animals, and in so doing engaging the people to restore their relationship to them–as food, cultural icon, and keystone species on the landscape.

2’09 role of buffalo for Shoshone people
5’15 all life is “our relatives”
6’43 buffalo as a keystone species on a fragmented landscape
7’16 cultural restoration that happens when you restore buffalo
8’10 how buffalo benefit the landscape
10’17 dietary consequences of buffalo extirpation
12’23 30 to 60 million bison before the genocide, and at the end less than a thousand
13’34 cattle gene in the bison genome
15’55 the loss of genetic diversity because of the extirpation of buffalo
18’15 how you get to 1000-animal herd
20’08 need a lot of land for wildlife restoration, which not all tribes have
20’38 shifting from the paradigm of ranched buffalo to being wildlife
21’09 Marker 1
22’21 wildlife management is more about managing people than animals
23’04 putting buffalo back on public lands
23’50 buffalo story is an American story, not only Native American
24’36 prioritizing wildlife, ecological integrity
25’51 going to East Africa with his biologist father and seeing wildebeests
27’51 collaborating with National Wildlife Federation toward bison restoration
30’29 focusing on growing the herd at this point rather than eating it
31’42 the idea of “wilderness” is foreign to native sensibilities
33’18 healing the trauma of the genocide through restoration
37’14 a magical buffalo story