Innovative approaches to regeneration on a California ranch 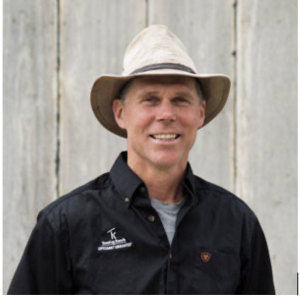 Since 2017 Mark Biaggi has been ranch Manager at TomKat Ranch, and 1800-acre cattle ranch and research center south of San Francisco, California. In this episode he talks about their Mediterranean climate, with six months of winter rain followed by six months of sun, and the necessity of managing first and foremost for water. Through healthy soil practices, including the careful moving and monitoring of livestock, he has helped the ranch increase water retention in the soil––which has led to healthier vegetation, including the return of perennial native grasses. He also talks about the importance of experimentation and a practice called “safe to fail,” which means trying new ideas that could lead to more success but also won’t hurt the business if they don’t work out. And he stresses the importance of reframing the idea of “waste” by repurposing materials once thought of as disposable and putting them to positive use.

2’33 Mediterranean climate with a rainy season and a dry season of about six months each
5’11 how to manage for good soil with livestock
6’47 managing for the best grasses for the soil
9’23 sometimes overgrazing can be used as a strategy for healthy soil, if you let the land rest for long enough
12’16 water infiltration seems better than before, though the science isn’t all in yet
14’24 what kinds of plants can break through really hard and plow-damaged soils
16’09 why soil stores water better than anything else
18’00 more water falls on range land than any other type of land, so it’s important that it fall on healthy soil
19’55 how different management could mitigate flooding in California
21’24 a lot of water management is about getting the water off the land instead of slowing the water down and storing it in the soil
23’31 how beavers can be used for water management
25’00 reframing the idea of “waste”
26’15 example of bale grazing
27’59 the “safe to fail” idea
32’06 the process of lifelong learning since his farming childhood
33’41 working with Point Blue Conservation Science
36’45 what would help scale up regenerative agriculture
38’23 agriculture shouldn’t be an extractive industry to give people cheap food, but it’s not sustainable
39’35 idea of leasing rangeland to the people who’d do the best job infiltrating water, slowing runoff
41’24 his own paradigm shifts
42’18 reincorporating animals into farmland
44’46 two examples of taking what would be considered waste and repurposing them
49’33 tomkatranch.org